HONOURING THOSE FALLEN FROM COVID-19

March 11th was the one-year anniversary of the WHO’s pandemic declaration, and people from labour, seniors and health advocacy organizations gathered on the Alberta legislature grounds to recognize the impact of the pandemic on Albertans.

1,928 roses laid for each COVID-19 death in Alberta on the pandemic anniversary

The Alberta Federation of Labour joined the United Nurses of Alberta, Friends of Medicare, Public Interest Alberta, Alberta Arts Action and Seniors’ Action and Liaison Team on the one-year anniversary of the WHO’s pandemic declaration to commemorate all the lives that didn’t need to be lost, and in recognition of the work that is yet to be done.  Placed on the ground were nearly 2000 roses — one for each person we have lost, colour coded for the age of each person, gold, silver and white for seniors, purple for people in their 50s, yellow 40s, blue 30s and pink 20s to show how seniors have been impacted.

July 29, 2019: Burden of proof in workers’ compensation: In the past no one in government was  willing to touch the sacred cow. Even the fair practice office passed the buck and refused to answer the question. How fair is that?

162 people who died as a result of workplace accident or disease were honoured at Edmonton’s Day of Mourning ceremony on April 28 at Grant Notley Park. Here are some photos taken by Paula Kirman – you can view all of her photos here, and view videos from the event here.

***Please visit our blog to read the WCB review recommendations and let your voice be heard!***

The Government of Alberta has announced the WCB review recommendations. You can read them here. CIWAA would like to share your comments with the government, as there is still some disconnect of how many injured workers view the WCB. For more information and the opportunity to make a comment, visit our blog post.

Here is our written submission to the Alberta WCB Review Panel, which was submitted via email in July of 2016.

CIWAA has been busy since the Beyond Workplace Wellness Conference on April 27, 2017 where we were invited by the AUPE & OHS to present our booth representing our views of the problem issues surrounding WCB. 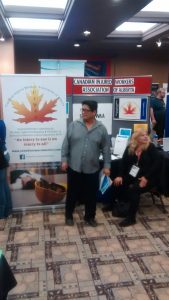 Namely our four pillars are 1) End of the Case Manager bonus system to close files. 2) End the Medical Panel and it’s use of Doctor’s opinions for sale contradicting treating physicians medical evidence. 3) Deeming: where WCB deems you are fit for some type of menial labour 4) Where is the WCB money? Why are we using AISH as a tax payer funded program for injured workers denied by WCB. Provide the WCB insurance as our right and keep the taxpayer (AISH) out of the equation.
Our booth was very  busy at the Conference and we generated a lot of signatories for our petition. Thank you to all the AUPE & OHS  members who stopped by to chat. Everyone attending the Conference was receptive to our cause.

On April 28, 2017 the CIWAA Executive attended the Day of Mourning sponsored by the Edmonton District and Labour Council at Borden Park. Tributes were paid to the 144 fallen brothers and sisters who were killed in the Alberta workplace in 2016. Very sad to think last year we killed 3 working people a week in Alberta. Shame!

Jared cares about the lives of injured workers and is able to share the suffering  through his words and acts of ongoing kindness towards the members of CIWAA. Jared thank you for making the lives of injured workers matter.
On May 1, 2017 CIWAA Executive attended the May Day rally. Due to our members handicaps we were unable to have any of our representatives actually participate in the march. It was another strong showing of working people and we thank the Alberta Federation of Labour for their support and organization of May Day.
CIWAA will be active over the summer following up with all our new contacts and supporters. We are still soliciting signatories for the Petition if you know of a group of people who share our views please mention the importance of our petition in helping to shape the changes that need to be made following the WCB Review.
CIWAA continues to advocate for the WCB to be human. Our government is listening. Incentive Bonus”s  for  case managers to discard injured workers by closing the claim has  been taken away. Of course this does not help the 100,000 plus injured workers still suffering from bought opinion’s and clerks playing doctor but will help future injured workers. Also agriculture workers now have WCB.

Thanks to AWHC, AFL and Black Cat Press local 445  for supplying printing  enabling CIWAA to get our message out.

Please print our petition and gather signatures. Print flyers and distribute to those unaware of how WCB operates. Here is our Reform and restructure the WCB flyer.

We would like to express our sincere thanks to all the Injured Workers who took the time to respond to the WCB review. Meetings are ongoing and as of yet we have no concrete progress to report though the idea of a Worker Task Force has been talked about a lot.

Once the meetings have concluded and we are sure of the direction the Government is going to take we will have an opportunity to join in with our recommendations.

Your stories provided the human element that was missing on so many of these WCB claims and for your input and support in the {be human campaign} we are truly grateful.

Good work to all who spent the time to tell their stories. The hope is every injured worker comes forward and is allowed to be interviewed regarding life after injury.

Please continue to have your doctor advocate for you and if they are willing to be interviewed by a reporter for a major news station they can send their contact information to canadianinjuredworkers@gmail.com.

Here is a video of Premier Rachel Notley speaking about problems concerning the Worker’s Compensation Board (WCB) at an event held by the Canadian Injured Workers Association of Alberta at the Garneau (Metro) Theatre on May 16, 2013:

A Injury To One Is An Injury To All! Please tell the government this abuse must stop.

Together we have a powerful voice.  Please sign this NEW PETITION. Here is the link for the pdf version, which can be printed.  Share it with your family, friends, co-workers, and doctors.

Signed petitions should be returned to:

We would like to present this petition to Premier Notley.